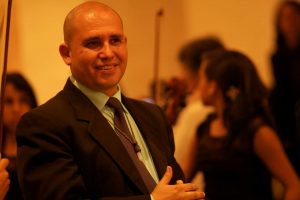 The Venezuelan violinist, conductor and pedagogue Mauricio Cárdenas has been under the tutelage of excellent teachers such as Jesús Hernández (Concertmaster of the Simón Bolívar Symphony Orchestra), and Zenón Díaz, Cuban violinist and graduate of the Tchaikovsky Conservatory in Moscow, to whom he owes a large part of his training as a performer and pedagogue.

He was a founding member of the Orquesta Sinfónica del Estado Mérida since 1991, with which he developed a continuous musical career for more than 15 years in concerts, national and international tours with excellent conductors and great soloists such as Gustavo Dudamel, Amilcar Rivas, Eduardo Mata, Eduardo Marturet and Gabriela Montero, among others.

In 2001, together with other fellow musicians, he founded the Polimnia String Quartet, with whom he carried out an intense musical activity. He began his career as a pedagogue in 1996, teaching violin classes and string workshops at the Orquesta Juvenil e Infantil del Estado Mérida.

In 2006 he was invited by the System of Youth and Children’s Orchestras of Venezuela to be the Musical Director of the Santa Cruz de Mora Nucleus, where he carried out an important management and pedagogical training activity, obtaining excellent results and the greatest recognition in his students selected by the Regional Youth Orchestra and the National Children’s Orchestra of Venezuela, orchestras in which his students have always stood out as section leaders.

In a personal quest, he studied for several years with the master guitarist Johann Espinoza, with whom he has taken courses in modern harmony, improvisation and jazz guitar technique.