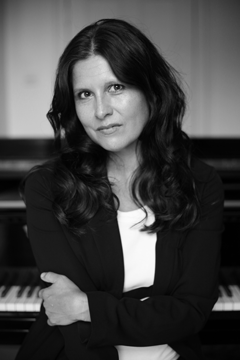 Pianist and Bolivia Clásica founder Ana-Maria Vera grew up in Washington D.C., but her affinity for her father’s native Bolivia was powerful from an early age. Ana-Maria was already touring with orchestras worldwide when she discovered her paternal homeland at age nine. Her grandfather had been a folk composer, writer and Aymara leader, and her grandmother was a “chola” who lived in the heart of the bustling witches market in La Paz; from this vantage point the rich indigenous culture as well as the striking social injustices left an indelible impression.

Ana-Maria’s trajectory has been remarkable. Her first recording at age eleven with the Rotterdam Philharmonic and Edo De Waart was awarded a Gold Record by Philips, and at age twelve she was invited to give a recital at the White House for President and Mrs. Carter. Vera’s stature in Bolivia grew quickly, and when she was sixteen the country issued a postage stamp bearing her image.

A former pupil of Ylda Novik and Leon Fleisher, Vera has appeared with the Philadelphia Orchestra, Cleveland Orchestra, London Philharmonic Orchestra, Australian Chamber Orchestra and Tokyo Symphony amongst others, with conductors including Riccardo Muti, David Zinman, Eliahu Inbal, Ken-Ichiro Kobayashi and James Conlon. She has given countless solo recitals across the globe and has also devoted much of her time to chamber music, developing close duo partnerships with Ivry Gitlis, Joshua Bell and Steven Isserlis. Her most recent solo recording, of the Goyescas piano suite by Granados, was released on Signum Classics.

Vera’s position in Bolivia often drew parents with musically talented children to appear at her father’s front door asking how their child could fulfill their aspirations. Her brother Armando Vera, a violinist and teacher who has spent over twenty years in Bolivia, has been a source of compelling testimonials conveying the need for better resources and quality control.

Realizing she might be in a unique position to help, Vera relocated her family from London to La Paz in 2011 to start a charitable music school for Bolivia’s young and talented, and found a world-class music festival there to bring top musicians to the region from around the globe. The challenges Vera and her team have endured so far on this still-ongoing journey have been numerous, but these have been largely offset by the enthusiasm and progress shown by the children. She has also received unprecedented support from the Ministry of Culture and the private sector, raising most of the funds in Bolivia.